Meghan Markle may never come back to the UK as she ‘simply doesn’t care’ what the British public think, a royal biographer has claimed.

The Duchess of Sussex , 40, who lives in a $14 million mansion in Montecito, California having stepped back from royal duty in 2020,  has ‘no intention’ of returning to London because she views Britain as a ‘lost cause’, according to Tom Bower.

The commentator, who is currently working on a biography of Meghan, told the Sun:  ‘Meghan’s ultimate destination is unclear, but she certainly has the backing to make a bid to star as an American politician.

‘In parallel, Britain is a lost cause for the Sussexes. In truth, I suspect Meghan no longer cares whether she is welcome in London. She has no intention of returning.’ 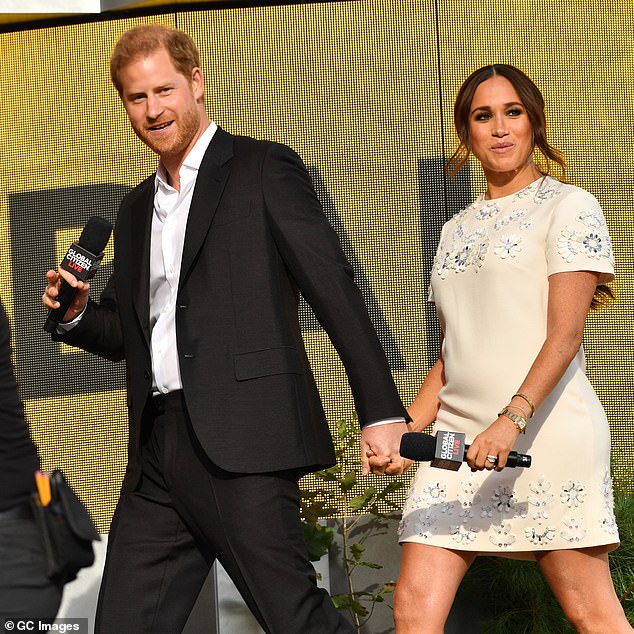 Meghan Markle may never come back to the UK as she ‘simply doesn’t care’ what the British public think, a royal biographer has claimed. The couple are pictured at Global Citizen in New York in September

He added that while her popularity has fallen in the UK since getting married, her three day visit to New York in September was a ‘remarkable success’ and  she clearly enjoys support among ‘Democrats, minorities and the young.’

It’s the latest revelation released from the tell-all book and comes after he said Meghan was branded ‘that minx’ by the Duchess of Cornwall, who thought she was ‘a self-seeking troublemaker’.